THOMAS WALSINGHAM (d. c. 1422), English chronicler, was probably educated at the abbey of St Albans and at Oxford. He became a monk at St Albans, where he appears to have passed the whole of his monastic life except the six years between 1394 and 1400 during which he was prior of another Benedictine house at Wymondham, Norfolk. At St Albans he was in charge of the scriptorium, or writing room, and he died about 1422. Walsingham's most important work is his Historia Anglicana, a valuable piece of work covering the period between 1272 and 1422. Some authorities hold that Walsingham himself only wrote the section between 1377 and 1392, but this view is controverted by James Gairdner in his Early chroniclers of Europe  (1879).

The Historia, which from the beginning to 1377 is largely a compilation from earlier chroniclers, was published by Matthew Parker in 1574 as Historia Angliae brevis. For the Rolls series it has been edited in two volumes by H. T. Riley (1863-1864). Covering some of the same ground Walsingham wrote a Chronicon Angliae; this deals with English history from 1328 to 1388 and has been edited by Sir E. M. Thompson for the Rolls series (1874). His other writings include the Gesta abbatum monasterii S. Albani and the Ypodigma Neustriae. The Gesta is a history of the abbots of St Albans from the foundation of the abbey to 1381. The original work of Walsingham is the period between 1308 and 1381, the earlier part being merely a compilation; it has been edited for the " Rolls " series by H. T. Riley (1867-1869). The Ypodigma purports to be a history of the dukes of Normandy, but it also contains some English history and its value is not great. Compiled about 141 ' 9, it was dedicated to Henry V. and was written to justify this kings invasion of France. It was first published by Matthew Parker in 1574, and has been edited for the Rolls series by H. T. Riley (1876). Another history of England by Walsingham dealing with the period between 1272 and 1393 is in manuscript in the British Museum. This agrees in many particulars with the Chronicon Angliae, but it is much less hostile to John of Gaunt, duke of Lancaster. Walsingham is the main authority for the history of England during the reigns of Richard II., Henry IV. and Henry V., including the rising under Wat Tyler in 1381. He shows considerable animus against John Wycliffe and the Lollards. 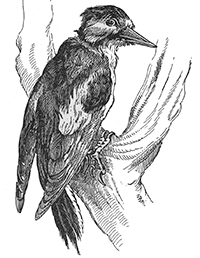