Naturalising Sounds: How Instrumental Music Is (Made) National

In 1997 the symposium "French and German Music in the 20th Century" in Frankfurt am Main concluded that "today all national typology has lost its validity" (conference review in Die Musikforschung). At the end of his article on "Nationalism" for the New Grove Dictionary of Music and Musicians, Richard Taruskin, citing Mark Slobin, expressed a hope for a pluralistic global culture consisting of a "fascinating counterpoint of near and far, large and small, neighborhood and national, home and away". This now seems to be contradicted by the nationalistic tendencies that are gaining popularity worldwide. Music does not remain untouched by this and can become the subject of ideological appropriation. Against this background, nationalistic currents of bygone music history gain relevance once more, after having been considered for some time as over and done with. Here we find examples of the mechanisms of making music "national" in a nationalistically charged socio-political climate.

The conference's main focus lies on instrumental music and those particular moments in modern music history when national or nationalistic qualities have been attributed to it. These instances occur outside the sounding music itself; they are manifested verbally: in texts accompanying music performances, writings of music theory and history and, last but not least, in the press. It is the aim of this conference to discover these instances in the wide realm of instrumental music, to examine, analyse and compare them.

We welcome papers of 20 minutes in length settled in the area of modern music history, focussing on questions such as (but not excluding others):

- Are there different strategies of branding music with a nationality in music criticism and analysis?

- Who decides about the nationality of music?

- How does one become a national composer? Can this status be lost again?

Abstracts (2000 characters), along with a short autobiography (700 characters), should be sent to Dr. Michael Braun (michael4.braun -at- ur.de), Department of Musicology at the University of Regensburg, no later than 7 August 2020. Conference languages are German and English. Notifications of acceptance will be sent by 28 August 2020. 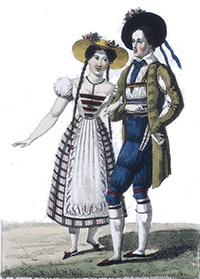